It is in contemplation to form a Golf Club in Tamworth.

When Hugh Armstrong placed this notice in the Tamworth Observer on Friday 21st July 1899 he set the date for the birth of Tamworth Golf Club. Dr. Hugh Armstrong the father of golf in Tamworth was the Captain of the Club in 1899 and 1900, the first club Champion in 1900 and Hon. Secretary in 1901, 1903 and 1904.At the meeting held at the Caledonian Hotel on the 24th July 1899, it was proposed by Mr. Nathan Cohen, seconded by Mr. Pigott, and carried, that a golf club be formed in Tamworth. An adjourned meeting held on Mondav 31st July 1899 elected the first officials required to conduct the affairs of the club. Dr. Hugh Armstrong was elected Captain; Mr. Nathan Cohen, Hon. Treasurer; Mr. E.W Wilson, Hon. Secretary; and the Ven. Archdeacon Lewis, Dr. Harris, Messrs. E.W Brierly and R.S. Pigott members of the governing council. The annual subscription being fixed at 10 shillings for gentlemen, 5 shillings for ladies. The names of some 14 gentlemen and five ladies were handed in as intending members.

The first links were in East Tamworth where players teed up near the top of White Street and played a nine hole course skirting the hills. On account of buildings interfering with the links and also on account of the stony nature of the course, the club moved in 1903 to a new course at West Tamworth, located on land leased by Mr. Nathan Cohen from the Peel River Company. The new nine hole sand green course was opened on the 28th July 1903, with the first ball being driven off by the President Mr. W.E Robey. The first club house completed in May 1904, at a cost of £542 and financed by the issue of £l debentures, was officially opened on the 27th July 1904.After the amalgamation in 1906 with the North Tamworth Golf Club formed in 1902 , under the name and constitution of the Tamworth Golf Club, the club moved to the North Tamworth course located on the common adjacent to the hospital. On the 10th June 1909 rules were pass which enabled the associate (lady) members to elect a committee of five consisting of Captain, Secretary and three others to manage their own affairs (handicaps, matches, competitions etc . The first officials elected were Captain Miss D.Walley; Secretary Miss I.Ingall with Misses M. Backhouse, K. Kelman and Mrs. W.A. Lee the other three members. The club remained at this location until 1920 when due to persistent drought the club’s links became quite unplayable. The club received permission from the Pastoral and Agricultural Society to lay out links on the showground. These New links were officially opened by the Mayor, Ald. E.E. UpJohn on Saturday the 1st May 1920.After playing at the showground in 1920,1921 and 1922 the club moved to the present site for the 1923 season.

In May/June 1922 negotiations commenced with the Peel River Company for the purchase of Cohen’s resting paddock at West Tamworth. This was the site used by the club in 1903,1904 and 1905. Agreement was reached to purchase 103 3/4 acres at a cost of £9 per acre, a deposit of 6 £233/15 was paid with the balance payable in 10 years at 6% interest. After being laid out by T. Howard, at a cost of £8/8/- plus train and accommodation expenses, the preparation of an 18 hole sand green links was commenced, trees being removed, fairways harrowed, several bunkers erected, greens chipped and sand carted. In addition the boundary fences were repaired and renewed, the pavilion erected a cost of  £200 was enclosed with a wire netting fence, lockers provided, and seating accommodation purchased. To finance the new course and pavilion l00 debentures of £5 each were issued. The new links although in use during the 1923 season, were officially opened by the Mayor Ald. S.W Bourne on the 19th April 1924.On Saturday 31st March 1929 a new club house built at a cost of 1,250 was officially opened by the President of the Country and Suburban Golf Association, Mr. W.A. Windeyer.During 1933 the club engaged the services of Mr. Arthur East, to inspect and report on the course generally, fairway treatment, bunkering and the establishment of grass greens. His comprehensive report recommended the establishment of grass greens. Work commenced soon afterwards with two greens being established by Feb/March 1934. The year 1934 saw the abandonment of sanded putting surfaces in favour of grass greens at a cost of approximately £386.For maintenance reasons the course was reduced to nine holes during the Second World War with the last nine of the present course being used. The course returned to l8 holes after the war. During 1947 drought conditions and water restrictions brought to the fore the need for an independent water supply. A well was sunk with an ample supply of water on the banks of Goonoo Goonoo Creek. This land was a generous donation by Mr. Basil Regan to the club. On the 17th June 1948 the tender of Mr. N. Bluett was accepted for the construction of a pipeline from the well on Goonoo Goonoo Creek to the course.Due to the resumption of land along Werris Creek Road modifications to the course were carried out in 1955 and 1956. A tender for £22,650 was accepted for extensions to the club house in March l 956. This work was completed in September 1957 and opened by Mr.Jack McQueen, President of N.S.W Golf Association on the 5th October.Severe drought conditions necessitated a second well in 1965 and extension to the dam in 1966.Joe White Maltings entered into a contract to supply 30,000 gallons of water per day in 1967, this was later increased to 50,000 gallons per day.The supply of this water became optional in 1976. A patio, store room extensions and a new pro shop were added in 1968, the original pro shop becoming an extension of the locker room for associates.

The sequence of play of the course was altered in 1972 and again in 1977. A Toro Fulltime automatic watering system, financed in part by the Australian Government R.E.D. scheme ($50,000) was installed and the dam enlarged in 1975.

There have been two major projects completed during the 1990’s. The installation of new Toro Network L.T.C. irrigation system was carried out by the contractor, Hydro Technics, at a cost of approximately $600,000 in 1994. A major refurbishment of the club house including a new men’s locker room, new bar, additional club house entrance, carpeting and painting throughout was completed in early 1999. The Tamworth Golf Club has been served by a number of professional over the years. The early professionals include Claude Robinson, George Mills and Tom Gorman. Since 1948 we have been looked after by two very long standing professionals, Terry Hanly from 1948 to 1974, Terry Hayes, from January 1975 to 2005, and now Scott Roworth. 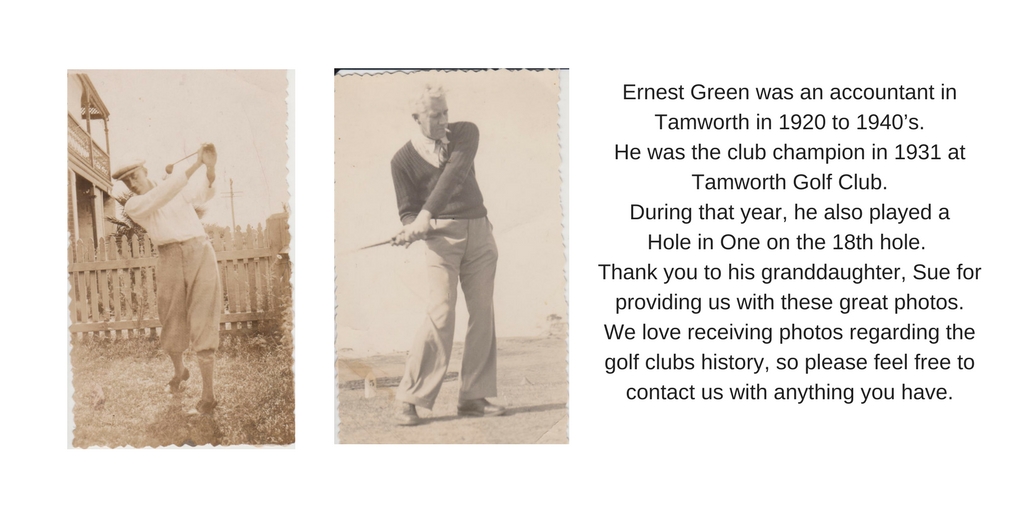 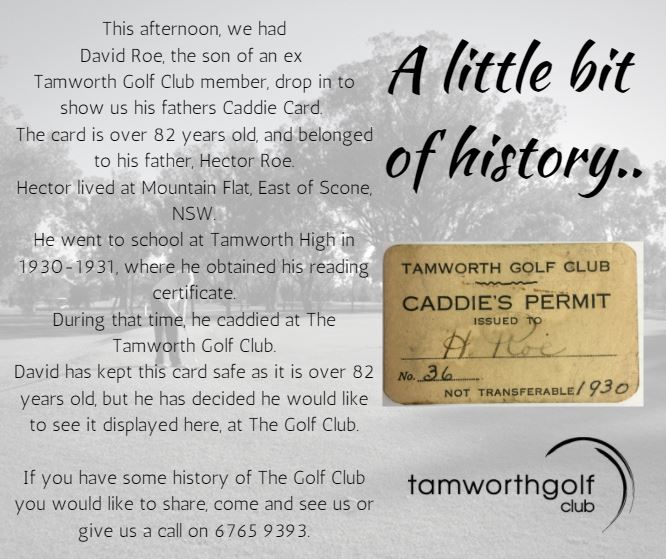